We were up bright and early on Saturday morning. The dogs were let out and we had a quick breakfast. We set of just after seven.

Navigating out of Engure harbour proved to be as much fun as coming in. Now we knew to be careful but that just wasn’t enough. Aliena went ahead and followed the markers and we slowly followed, all the time watching our depth. It must be calibrated wrong, since we touched ground when it showed 2,1 m. We should need about 1,95 so there’s plenty of margin. We actually didn’t just touch, we got stuck in the sand. Some extra reversing and we got unstuck and tried somewhat closer to the pier and managed to get through.

We laid a straight course on the fairway and didn’t change for Riga until we were well out at sea. The forecast was right, no wind. Or 1-2 m/s which would lead to a 24h trip. We engined on at 6 knots and were at the entrance of Daugava River by noon. From there we had a 10 NM trip upriver to Andrejosta harbour.

Probably due to the previous days events, and the unfortunate incident in the morning, the local pilot boarded us about 5 NM from the real pilot point. He got off when he saw that we came to the right point and set a correct course.

Arriving at the harbour it looked ok, but the harbour master didn’t approve of our first attempt at mooring. He showed us other places, not at the guest pier. Funny. There’s still space there six hours later. Well, we’re tied upend have electricity again, so there’s no problem. And the wifi works. Occasionally. 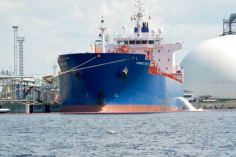 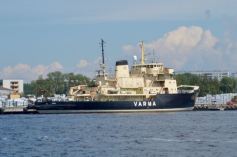 Graffiti on a barge

Your guess is as good as mine

For the DIY man