What a beautiful morning! Since we were not in any kind of hurry, and the forecast promised some rain in the morning, we had a nice, relaxed breakfast. The Swedish Meteorological and Hydrological Institute (smhi.se) has a great new radar service which updates about every five minutes and we could follow the showers  almost in real time and planned our departure accordingly.

We set off from Lidö around eleven in a moderate breeze, but due to our cruising mode, decided to pull in the first reef quite early. We had to go upwind but since our first destination was only about ten miles away, we were in no hurry. We sailed along so quickly, that we reaches the Rödlöga archipelago way ahead of schedule. We decided to push on since we didn’t have to tack too often. What a mistake!

The previous night I had checked the forecast, and there was some rain forecast for around three. In the morning I didn’t remember it anymore. At about 14:30 local time we saw the great black clouds rolling in. It was time to very quickly get our rain gear on. Just as the skipper had his gear on and was at the helm, the sky opened. That wasn’t enough.

It was a real thunder storm with lightning and all that tore over us. Wind speeds exceeded 25 knots and the gusts were hitting thirty. And we had the full sails up. As the first mate was still donning her gear, the skipper had to pull in most of the genoa, but just couldn’t trust the autopilot to be strong enough to reef the main. Once the helmsman was changed, we quickly got the first reef in. Luckily for us, the wind was westerly i.e. from the mainland. That meant the waves weren’t that bad. But the gusts kept heeling the boat over rather uncomfortably. We pulled in the second reef, but ten minutes later, decided to pull in all sails. From what we saw half an hour later, most others going in the same direction had done the same thing. Even those coming downwind had reefed sails.In the heat of the moment one could hardly see 100 metres ahead. And with my glasses on, hardly even that.

As quickly as the storm had come up on us, it was gone and the beautiful sun was shining again. Time to set sail and continue. At around five we were by Möja and decided to push all the way to Sandhamn in the beautiful evening sun. Great decision! It seems that we’ve become bolder, and somewhat more careless with the weather, and we got a real lesson today! We made some mistakes, we should have reefed first, then put on the rain gear. Somehow I think that it wouldn’t have mattered, we would only have more wet clothes now.

The wind was still quite brisk when we moored in Sandhamn, almost 15 knots. We got a great place with our stern to the quay and our fore to the wind. Easy to get the dogs off, and with less wind for the next couple of days, it should be fantastic.

We made it, in just over a week. The second goal for this trip has been achieved. Last time we were here, we couldn’t see anything because of heavy fog, and couldn’t even get a berth because of a three our queue.

Here are some pictures from our evening stroll. Tomorrow it’s time to check out all the murder scenes…. 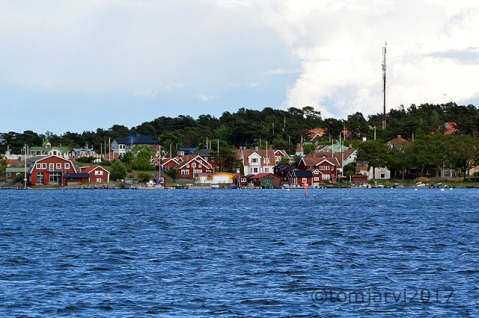 Coming in to Sandhamn

Another shower and rainbow 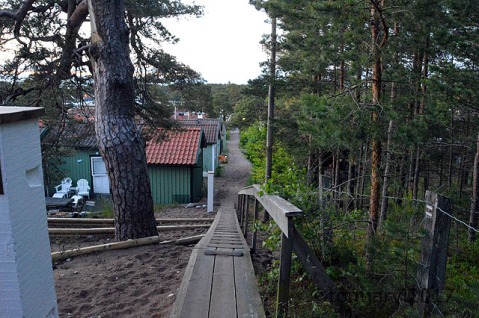 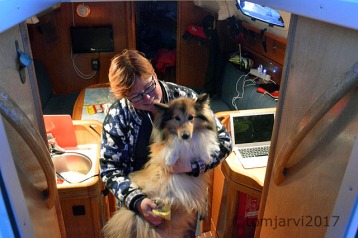 Sandhamn= sandport, and the dogs bring plenty of it

The joy and happiness when your new gear works (EcoFlow River + 110W panel) like you imagined. Let’s hope that this is not just a test. Beautiful anchorages, here we come!
The photographer could not do justice to this exquisite mud cake for three and delicious macaroons. Thank you @cafecabriole
#magnusenckell #deathswalk and tomjrvi #coronaswalk
A quick weekend #minivacation to the tropics. Look mum, a cocoa tree!
My friend the merchant marine cargo freighter captain calls us WAFI, wind assisted f.. idiots. This is obviously why..... Should’ve listened to the radio and anticipated them leaving the berth. Sorry.
Bark boat laid up for the winter season.
Absolutely magical father’s day cruise. A bit chilly but sunny and 10-20 kn of NW winds all day! One of those sunsets.
Father’s Day. Sailing. This is a first time experience. Magic.
Finland. November. Sailing. What a wonderful concept. The sun is so bright that my #raybans can’t cope.