We motored all day in a beautiful sunshine and arrived at the locks in Kiel, seeing an invasion of small boats cramming in. We had decided to pay our fare and headed for the machine on a pontoon.

The boat ahead of us had the same idea, he paid quickly and made a dash for the lock. Alas, the lights had turned red and neither he or us made it in time. So we just had to sit there and wait for our turn. I think during the hour long wait, all of the boats we had passed made it to the waiting area with us. As the previous cargo ship came out, and another one packed in, the fleet of nervous sailors started positioning themselves as if we were preparing for a race. The red and white lights were blinking, and the line looked as if it was the one minute mark. When only the white light started blinking, the first boats shot off into the lock. Great fun.

Well in the lock, we had some problems tying up, with the wind blowing us sideways. It didn’t take long, and we were out again. We headed to Laboe, about three miles north for our provisioning stop. One of the crew members was also getting off at this stage.

We had hardly tied up and I had checked in, when we had to call the paramedics. The owner had stepped off the bench into the cockpit and twisted his ankle. The swelling was enormous, and I could immediately see that he had torn ligaments. As the skipper, I needed a second opinion on how bad it was. He could probably not continue onboard.

The paramedics were friendly, though not very well versed in the English language. My German comes from watching der Alte in the eighties. But we managed to get all the information needed. At the hospital, a doctor finally appeared about an hour of waiting in the corridor. And he spoke excellent and fluent English. His immediate diagnosis was, that this man is not going aboard in a while. After ordering x-rays, he said we would know if we needed surgery. He had several other patients ahead of us, and his time estimate on when we’d be out was 6-7 hours. I could go off, and be back in 90 minutes. I should buy something to eat and drink, for myself and my friend. If no surgery was needed, he could also eat and drink while we continued to wait.

What a relief it was a couple of hours later when the doctor had his final diagnosis. No fractures, no operation, the guy is allowed to fly home. With a plaster cast on, he wouldn’t. Now, he was only given a very stiff removable cast and orders to use it all the time for the next six weeks.

I managed to reserve a hotel room in Laboe and the insurance company was trying to get him a flight out. We got back to Laboe after unsuccessfully checking through two pharmacies for the ordered medication. Luckily, at the hospital he had been given enough for a couple of days.

After returning to the boat, we went over the evenings events and what would be happening next. Earlier on I had ordered that we would not be leaving the next day, so that everything could be sorted out.

On Sunday morning, we bade our farewells to one team member and went to check on our patient in his hotel room. Things were moving along, but he would have to wait until Monday before leaving. The insurance company is in charge now, and the captain can do no more. After eating lunch, we said our farewells and headed for the supermarket to finish off the shopping list and other chores we have around the boat.

We are only four left, and have to plan accordingly. We are right on the original schedule when we cast off at 0320 UTC (0520 local time). First stop, petrol station which isn’t open on Sundays. However, we probably won’t be making the same kind of legs as before. Our next port of call is Rønne on Bornholm, about 170 NM, or 50 odd hours. After that we will se how tired we are and what the winds will be and plan accordingly for the next leg. 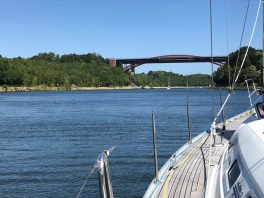 Waiting at the locks Kiel 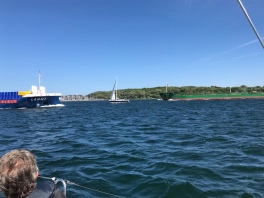 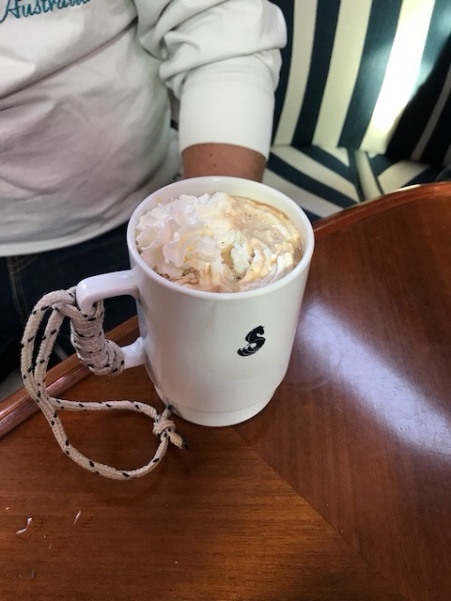 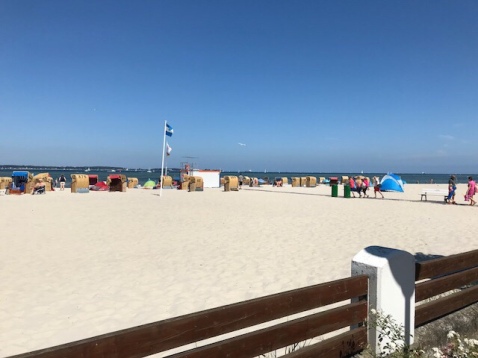 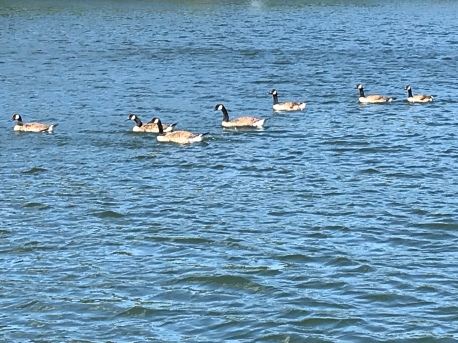 Locals in the Kiel Canal