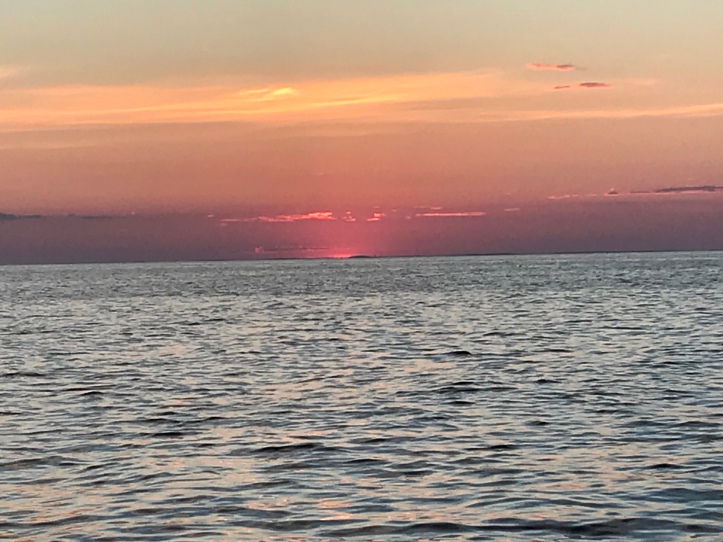 After leaving Saltö Fiskhamn in a beautiful evening sun, we found no wind for the net 200 NM. so we motored all the way to Nynäshamn for some final grocery shopping and a shower. We arrived at 2320 UTC in the dark of the night.

It was a quick pit stop. Less than eleven hours later we had slept, done some grocery shopping, updated our weather forecasts and refuelled. We were off again. It was quite a brain racking planning exercise. Naturally there were some doubts about how well the captain had fixed the engine problem, andI didn’t want to find myself in 20 knots of wind anymore. So close to home, the comfort factor is finally taking hold. The weather promised very light winds on the coast for several hours, light winds further off, and a possibility of up to 12 knots for Monday morning.

We did get roughly 20 NM of sailing out of Nynäshamn. Our speed was 4-5 kn, but then it fell below three, and it was time to turn on the Volvo. How happily it kept sprouting water out of the exhaust. So it’s fixed. A nagging problem since we left Jersey, has been the amount of water that has accumulated under the battery box. That problem no longer exists. So somewhere along the line, while removing all the pipes and re-attaching them, I’ve tightened something that I haven’t seen as a problem. No water coming in anywhere at the moment.

We’ve been heading very straight for Hangö for 23 hours now. We haven’t found the promised wind. In the early morning there was a slight breeze and we pulled up the sails but it certainly wasn’t enough for our goal of hitting the sauna on Monday evening. So we motorsailed for about six hours. We got about a knot extra in speed, that’s about 15% more, which meant over an hour less of travel.